Once upon a time Toronto was was called the worst sports city.  Native Torontonians were willing to admit: worst in the province, worst in the country, worst on the continent, worst in the world.  Today street walkers in TO are likely to shake it off.  The sports scene in Toronto has made a dramatic shift.  A new lane seems to be opening.

Toronto is home to the most major league sports teams in Canada.  Known to all: Toronto Maple Leafs, part of the original 6 of the NHL, a team that has brought the city pride, humility, and sadness.  Toronto FC of the MLS has done the same.

The city is home to the Toronto Raptors and the Toronto Blue Jays.  Although they’re based in Toronto they’re often called “Canada’s teams”; Raptors are the only Canadian NBA team; Blue Jays are Canada’s only MLB representative.

Lacrosse is a game.  It was played by the Indigenous in Canada.  It’s gaining more recognition.  Some may know the name, recognize an image but be unfamiliar or have no idea what the rules of the game are.  Toronto Rock are a member of the National Lacrosse League (NLL).  NLL houses 9 teams; 4 are Canadian.

Newest on the block: Toronto Wolfpack.  They are another Canadian team; the only team playing rugby across the Atlantic.  Fortunately they haven’t forgotten their roots; they have started their records a Torontonian way.

Toronto Argonauts is part of the CFL (Canadian Football League); today it competes with 8 other teams, all Canadian, for Earl Grey’s Cup.  The league is old.  Debate of expansion to include a team from Atlantic Canada continues.

So why the worst?  Prices for games in Toronto are considered super high.  Today it can cost anywhere from $18 to $1000+ to see a single game for a Toronto sports team.  Despite being called the greatest embarrassment by locals, Maple Leafs are always sold out; their tickets are the highest of all Toronto teams; they’re considered the greatest franchise in the NHL (aka the team that makes the most money).  To combat this many Torontonians drive a bit to see Niagara Falls, win some money at the tables, then cross the border and watch the Leafs play in Buffalo.  Some have said there are more Leaf fans than Buffalo fans at the Keybank Center when they stepped in to watch a game.

Compared to the rest of Toronto’s teams the Argonauts have done relatively well in the last 5 years.  In 2016 they were at the bottom; in 2017 they won the Grey Cup; they clinched the division twice.  In 2018 they’re competing with Hamilton Tiger Cats for second in the East.  Pretty impressive for a Toronto team.

When they first entered MLS in 2007, Toronto FC were a true Toronto team; not only were they able to claim 7/7 in the East, they were able to clinch 13/13 in the league.  Unfortunately they have improved in the last 5 years; whether they’re forgetting their Toronto heritage or helping the city move into the future is unknown.

In 2013 Toronto FC was second from last in the East, DC United took the prize.  2014 saw Montreal Impact steal last from DC United; meanwhile TFC rose to 7/10 in the East.  In 2016 they were in the championship.  They lost to the Seattle Sounders.  2017 saw a championship rematch, Seattle Sounders vs. TFC.  This time TFC won!  The second TO team to join the exclusive Winner Club.  They don’t have a place in 2018 postseason today but will be playing weekly until October 28.

Toronto Rock have done well.  NLL was established in 1987 with the Washington Wave, Baltimore Thunder, Philadelphia Wings and New Jersey Saints.  Today it’s a 9 team league.  The Hamilton Raiders were the first Canadian expansion team, 1997.  In 1998 the Raiders turned into Toronto Rock.  Surprisingly, after moving to Toronto the Rock/Raiders ended the 1999 season with a perfect home record, a 13-10 win over the Rochester Knighthawks in the Championship, and a sell out crowd of 15,691 in Maple Leaf Gardens.

20 years later (2017) Toronto Rock reached the playoffs; they had landed in the playoffs multiple times before.  2018 Saskatchewan came out on top.  Toronto didn’t have a spot in the playoffs but they weren’t last.  2019 might see them bring the National Lacrosse League Cup another stone in Toronto’s growing trophy cabinet.

Toronto Blue Jays have only won the World Series twice, back-to-back in 1992 and 1993.  They reached postseason as the second wildcard team in the American League.  Today they’re not in the standings for a position in postseason but have until September 30 to finish a season.

Toronto Raptors and Maple Leafs are the most popular teams in the city.  Since 2013/14 season the Raptors have annually appeared in the playoffs.  They’ve never brought home an NBA Championship.  The Maple Leafs stood next to them when they reached the playoffs in 2016/17 and 2017/18.

Known to Canadians, not just Torontonians:

Lord Stanley’s Cup lives in the Hockey Hall of Fame in Toronto; the last time it was raised by someone with jersey featuring the blue maple leaf and the word “Toronto” was over 50 years ago, 1967, when they defeated the Montreal Canadiens.  Montreal Canadiens were the last Canadian team to hold the Stanley Cup in 1993.  There was a 7-year streak of Canadian teams holding the Cup – Calgary Flames, Edmonton Oilers, and Montreal Canadiens (1984-1990).

It’s widely known: Toronto is a culturally rich and diverse city with the most multiculturalism worldwide.  There are also chances it may become the most sports diverse city.  NFL has been considering expansion to Toronto.  Some support suggesting it will bring more tourism and popularity to Toronto; others argue against an expansion saying it will reduce or eliminate CFL.

For years Toronto has been speaking with the NHL (begging) for a second team.  The central argument: “New York has two teams, why can’t Toronto?  The Leafs are already the richest team with strong attendance.  If there was a second Toronto team locals wouldn’t just have more hope, NHL would get more money.”  Many, not just Toronto, argue an expansion team should have been brought to Toronto rather than Las Vegas in 2016.  There are suggestions of giving a team to neighbouring Hamilton or Mississauga.  Rather than building a new stadium in TO, send it to a city that can build their own and boost itself.  The question: if the team is next door rather than in Toronto, will it follow the Toronto way?

As NHL and NBA openers approach Torontonians wonder: will the Maple Leafs and Raptors take the traditional Toronto path or continue to show TO postseason?  Whether they win a championship and join TFC and Argonauts in the Champion Box or choose the Bottom Basket, Toronto fans are called loyal; supporting, cheer, and remaining hopeful.  NBA and NHL seasons run at the same time; Raptors and Maple Leafs both play in the Air Canada Centre, today Scotiabank Arena.

Many are looking for a return of Jurassic Park and Maple Leaf Square.  When recent playoff run began the square outside the Scotiabank Arena became “Jurassic Park”.  The Raptors’ games were shown to fans on a big screen at tailgate parties.  In 2018 Toronto Raptor and Toronto Maple Leaf games were broadcast on the big screen. With enormous tailgate parties for the two playing on the same day as TFC final, the square became “Maple Leaf Square” and “Jurassic Park” on the same day with pride for the TFC win.

The question now: have Toronto teams reached the end of their track or are just taking their time to speed up? 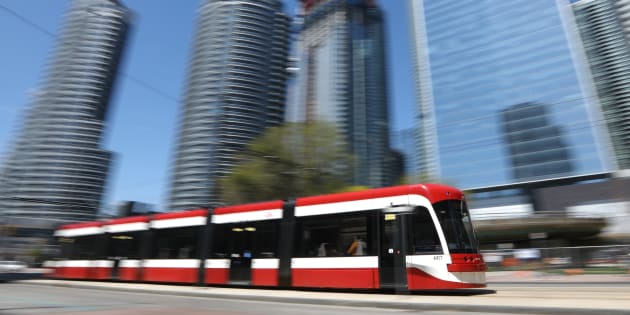