The Union.  It’s become a part of the Canadian society.  It’s an icon of employee solidarity and public employees; it’s often associated with fair treatment.  Education Unions have an identity as complainers; persons caring about their own welfare not those they serve.

American auto workers have been identified with spurring the labour movement, creating the United Auto Workers (UAW), a union, in 1935, the midst of the Great Depression.  It to a strike in 1936 for better working conditions and wage, a then unconventional method of protest.  The UAW strike in USA was viewed as a backward movement at the time; today strikes and unions are considered advances in the economy.

Wage and work conditions are common factors before a union decides to strike.  Among education workers other issues often take the front.  Movements – work-to-rule and strikes – by ETFO (Elementary Teachers of Ontario) and OSSTF (Ontario Secondary School Teachers Federation) – are today piece of the Ontario culture; Premiers are likely to be faced with at least one education strike in their term. 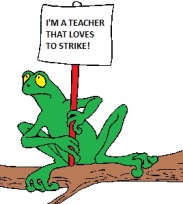 Condition improvement demands by OSSTF and ETFO often include smaller class sizes and more teachers.  Today in Ontario a strike by College Educators (OPSEU) includes movement from contract to permanent workers and more influence.  Demands known by all.  Seemingly unknown to teachers, administrators, and politicians, students also play a role; they are demanding to go back to school and receive an education as promised.  These are rarely met.

In 2013 York University contract educators – professors and TAs, CUPE Local 3903, went on strike.  The school/university closed.  The York University strike took place in the Winter semester, after January.  The Winter semester was extended by one month; rather than ending in April 2013 the semester progressed until May 2013.  Exams and classes continued after an unexpected, unwanted reading week.  Many students graduation, graduation parties, and post-graduation plans were affected.  Summer employment and summer study plans were affected.

Today the OPSEU strike is taking place in colleges across Ontario in the Fall semester.  This means time lost in the first semester of the academic year.  Depending on how long the strike lasts will affect the extension of the Winter semester.  Rather than ending in mid-December and allowing students a holiday in Christmas and New Year’s Eve the semester may be extended to all of December.  The alternative, extend the semester into January.  That means the start of the second/Winter semester will be delayed leading to a later end leading to problems for students similar to those of the 2013 York University strike.

Strikes in secondary school (OSSTF) and elementary schools (ETFO) rarely lead to an extension of the education period.  They more likely lead to more schooling being forced in a lower time period, 5 papers a week instead of 2.  Studies have been disrupted and schools have also been closed because of CUPE support staff in schools using work-to-rule methods and striking.

All parties – administrators, unions, and politicians acknowledge that students are affected they are rarely willing to take action to assist students.  At York University students were not given any form of compensation for their lost of study time.  There are no plans for refunding tuition to college students.  Public school students don’t pay for their education; the best compensation is a promise that younger students will not be subjected to the same treatment.  It’s a miracle if it comes.

The government has the power to pass legislation to return educators back to teaching, what they were hired to do, while bringing both parties to the “bargaining” table.  It’s rarely done.  The reason: politics.  If the government passes legislation it’s viewed negatively by unions, teachers and administrators; if it doesn’t and agrees to better conditions for students it’s likely to be in the good light for unions, administrators, and parents.

Strikes often come when both parties leave the bargaining table.  Rather than sitting in a room with free lunch and just having to talk they decide to leave so the educators can get exercise and the administrators can go to a bar instead of eating pizza.  All the while they tell the students “Sorry, we won’t be coming to the classroom; watch Discovery Channel while you’re at home.”

If nobody is willing to ensure students get the education they paid tuition for, either from their own pocket or through their parents’ taxes, at least sit in a closed room and talk.  Today OPSEU is on strike.  There are no plans to return to the bargaining table.  No end in sight.

The strike has been getting attention on Twitter.  It includes support for students’ education, tuition refund, and support for striking OPSEU.  Some includes reference to politicians.  Students are also tweeting about their own experience.

There are going to be a lot of grumpy students tomorrow either way. They should decide before bed, like.. 9! #COLLEGESTRIKE #OPSEU

Once again, a terrorist-like union strikes fear and outrage. Thanks #OPSEU for killing many college kids dreams of higher learning.

Thanks Humber theatre students for bringing coffee and donuts to striking faculty today. We’re doing this for you. #humberpr #OPSEU

When you were studying for your midterm this week but heard colleges were going on strike #OPSEU #OntarioCollegeStrike pic.twitter.com/oGmhRAz3QC

Got this crazy idea to help end the #ontariocollegestrike and & let everyone get what they want. It’s call TALKING!!! YOU HEARD OF IT, Huh?! pic.twitter.com/ofvH4oNOCh

Different hashtags are being used in Tweets, recruiting multiple reactions.  They include support and opposition to #OntarioCollegeStrike, #CollegeStrike, #StandWithFaculty, as well as reference to #OPSEU, the Ontario Public Service Employees Union, among others.

Teachers and educators are constantly spoken of being role models.  Strikes and labour movements occur because of a vote; if the majority says yes there is a strike.  From their refusal to educate they set a terrible example for any they are educating.  There is the chance they may be teaching future teachers what not to do.

Educators, administrators, and politicians are uneducated on the pendulum effect – because of one action, many others take place; the first one isn’t the only one that moves. 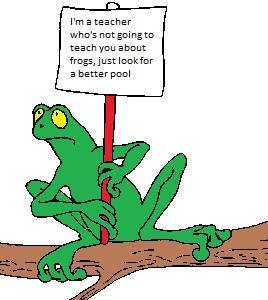 Note: No insult to frogs is intended.  Teachers hop from complaint to complaint similar to frogs that hop from lilypad to lilypad.  Unfortunately, though frogs know where to stop teachers don’t.  They keep disrupting the learning environment.  It can be seen that the frog is sad because it has to take the place of a teacher.