The laid back Aussie and polite Canuck
Rahman Mohamed 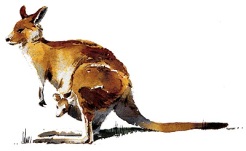 Both nations are on the world map.  Both have a population based on immigration. Within each there is a record of mistreatment of Natives when the lands were colonized. The Land Down Under and The Great White North started as British colonies; Australia was actually the British Empire’s Guantanamo Bay; they sent their prisoners down instead of keeping them jailed.  Today both are part of the Commonwealth; they “honour” the Queen and use “zed”.

The two lands differ in climate; Australia is a perpetual summer while Canadians live in a constant winter.  Their mode of acceptance contrast but both have accepted large numbers of refugees and asylum seekers.  They differ in sports, Australians favouring cricket and football (soccer) compared to Canadians choosing ice sports and growing track and field.  So why are they so similar?

In 1867 four British colonies in North America came together to form Canada; on 1 July 2017 Canada began its celebration of 150-years of confederation.  Australia is slightly younger; on January 26, 2017 it celebrated 116 years of independence after being granted independence in 1901.  Both lands brought independence in a peaceful manner; rather than a War of Independence like USA, Canada and Australia just found a couple of people who were willing to draft a constitution and take it to Britain for a stamp of approval.

If you google Canada some of the first to come up is the proud beaver waving a Canadian flag.  For Australia it’s the kangaroo hoping into the sunset.  Each is a native and unique to its land; you won’t find the beaver or kangaroo anywhere except in their googled land.

The Canadian protector: a Mountie and a moose walking peacefully alongside.  The Australian hero: the boomerang throwing Crocodile Dundee.  Both will take a cold one whether its a hot summer day in the dessert or -40°C (not Fahrenheit)  on an iceberg.

Both are empty lands.  According to the World Bank as the world’s population continues to rise population density hit approximately 57 people/km² in 2016.  From 1961 to 2016 Australia rose from 1 to 3 person/km²; while Australia tripled Canada just rose from 2 to 4 person/km².  Macao Sur, China rose a bit a higher than the two, from 8523 to 20,204 person/km², the highest on Earth.

Together with accents and trademarks, the Australian “G’day” and Canadian “eh”, the people of the two lands have strong similarities in personality.  BBC has featured them both in travel; the polite Canadian and the laid back Australian.

The Australian attitude is considered to have come from its history.  Equality is rooted in Australia – prisoners, immigrants, and natives on equal footing.  Rather than fighting for dominance they relaxed and embraced equality.  Canadian attitude is considered to be based on vocabulary used; they’re considered polite because they use a more positive language in comparison to Americans.  Canadians are proud to share the world’s “longest undefended border” with Americans, a bother brought by the crossing of asylum seekers after the election of President Donald Trump; Canada and USA have strong intertwined economies; culturally they greatly differ.  Canada constantly works to differ itself from the aggressive American; Canadians want to be the passive beaver.  In an article published on June 28, Maclean’s in Canada reported an academic study found Canadians being seen as more polite than Americans because of the language they use.

Australia and Canada are both geographically isolated nations; Australia sits in the South Pacific.  It’s in close vicinity to New Zealand, Papua New Guinea, Indonesia, Malaysia, and Singapore, but separated from all by the ocean.  Canada lies close to Greenland and Iceland; it only shares a land border with the United States.  Australians and Canadians are both considered humorous, taking laughs at themselves, using their stereotypes against themselves, and portraying themselves as a world humour.  Canadian comedy might soon face competition for Australians.

Both use tourism as a strong economic player.  Australia has been a popular tourist location.  Recently Canada has been rising as tourists learn more about its diverse landscape and multiculturalism; some choose the North over USA.

The question: if Canada and Australia faced off (Hockey World Cup or FIFA World Cup), would either win?  Australians might just lie down on the field and take a nap.  Canadians might score but they’re likely to apologise for every goal they score and every puck they save.