More education, more likely to be employed and have an easier time paying of loans; Ontario leading
Rahman Mohamed

Canada and the world is still coming out the “Great Recession” but December saw a drop in Canadian employment levels as 46,000 jobs were lost; unemployment for 25-54 year-olds increased to 6.1%, but still below the national rate of 7.2% and the youth rate of 14.0%. But according to Statistics Canada, if you’re well educated, you’re more likely to get a job and you’re more likely to earn more money.

According to a report released on January 7, 2014, Education indicators in Canada: An international perspective, 2013, Canada was third on the list of percentage of aged 25 to 64 had completed high school in 2011 (89%), higher than the average of the Organization for Economic Cooperation and Development (OECD) – 75%; only Czech Republic (92%) and the Slovak Republic (91%) were higher.

In terms of post-secondary education, Canada was ranked 10 (37%) among the OECD.

According to the (2011) National Household Census, Statistics Canada reported that the higher your education the more likely you are to get a job; nationally the employment rate for adults 25-64 who’ve completed a tertiary education (post-secondary – college, university, grad school) at 82%; 55% high school educational employment rate.

Employment rates of the 25- to 64-year-old population, by highest level of education attained, 2011

Together with that, according to the National Household Survey (2011) it’s possible to pay-off your student loan; two-thirds of Canada’s top 1% had a university degree.

Only 1 in 10 Canadians with a post-secondary certificate or diploma below a bachelor’s came into the top 10% of income earners; 1 in 20 have a high school diploma; 1 in 50 with none of the above sneak in. 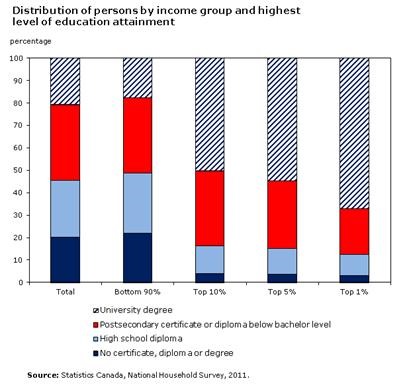 All you have to do now: finish what you start (or start) and you’ll have something waiting to help you pay it off.