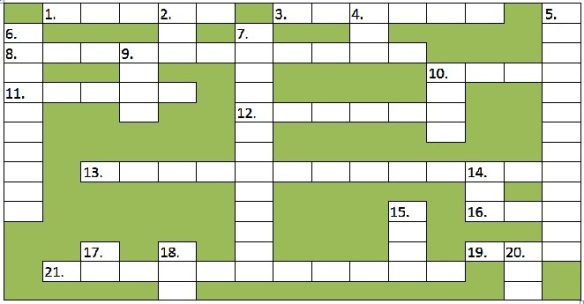 Today is Earth Day and spring is here. This year in Canada it started on time instead of early. But for some reason Ontario is still getting snow. Because of Climate Change there are changes we need to make. Here’s crossword to help you learn more. Come back next week and you’ll get the answers.

Across
1. It’s the name of the party in Canada’s Parliament with the lowest number of seats even though they’re smart and have good ideas.

3. One of the parts of the Earth that’s melting; it has a sister on the other side of the world that’s colder, but she’s melting too.

10. A unit to measure electricity (singular). If everyone used less of these, we wouldn’t just save energy, we’d pollute the world less.

11. Because of pollution there’s a growing hole in this that’s changing that world. This hole isn’t just making the world hotter; it’s doing other things like letting in more solar radiation.

13. A way to get to the movies ecologically, but one that has skyrocketing fares. It’s not easily available, and is something governments are reluctant to invest in. A lot of people view it as second class (2 words).

16. The path the sun takes across the sky. Strange that most people know about the path of the sun and know that it rises and sets, but don’t know that the most multi-coloured sunrises and sunsets are in the most polluted cities.

19. The price of this non-renewable fuel is skyrocketing right now. Even though Canada is loaded with it we still have to pay the high international price. You know if you drive. This fuel is a cause for climate change, and ecological disaster.

21. A form of alternative fuel that uses light, the sun and panels, but is one that nobody, including the government, is investing much in. Even though people can get rebates from the government if they install panels that use it on their roof, not many people choosing it; not much promotion about it from the government’s side about it either (2 words).

Down
2. At this time of the day the stars should start to come out. But because of all the pollution in the air hardly any stars are seen in the sky if you’re in the city.

4. A metal vehicle that is the primary mode of transportation for many North Americans. It also produces a lot of bad gasses that contribute to global warming.

5. Countries around the world, including Canada, signed onto the treaty with this name agreeing that they would all help make the world reduce their pollution and make the world more ecological, but no one really followed it (2 words)

6. This is the name for all the layers of gases above the Earth; it’s is made of the Thermosphere, Mesosphere, Stratosphere, and Troposphere. It’s also home to 8-across.

7. This is one of the primary gases causing climate change. We’ll never get rid of it because we breathe it out and trees breathe it in and trees help us survive when they produce 12-across; it’s argued that by using less fossil fuel we’ll help Mother Nature by producing less of it; the trees will still survive (2 words).

9. A type of tree. We’re cutting down too many of them. If we plant more of them instead of cutting them down, maybe we’ll help the planet instead of destroying it.

10. Another type of alternative fuel. It uses turbines instead of panels but because it annoys people and the turbines have been put up in the wrong place, it’s causing a lot of controversy all over rural Ontario (it’s starting to cause controversy in Toronto now)

15. Most people believe you only get cancer in this part of your body if you smoke, but air pollution is a cause of it too.

17. The chemical symbol for a gas that’s released by cars that are powered by gasoline. You’re supposed to have a detector for this gas in your house because it might leak in from your garage and if you breathe in too much you’ll die. If we all switch to hybrid or electric cars, or even just use 13-across, then our problems might be solved.

18. The smart Party in Canada’s House of Commons suggested placing this on a chemical that comes out of the smoke stacks of factories (part of 5-down). It would help the government get more money, reduce emissions, and encourage firms to look at alternative sources of fuel. Unfortunately the government in power didn’t like it so it isn’t being used, companies are still polluting, the government is still in debt, and people think that the party is dumb.