March is Epilepsy Awareness month.  But for the 1 in 100 Canadians who live with epilepsy, Tuesday March 26 is the highlight: Purple Day.

After Cassidy Megan from Nova Scotia began Purple Day in 2008 to raise awareness for epilepsy, it’s not only gone global, but become a nationally recognized day in Canada last year after a unanimous vote in the House of Commons on Bill C-278, an independent bill from Liberal MP Geoff Regan from Halifax West, was taken to the Senate.  It didn’t get through the Senate in time for last year’s Purple Day, but this year Canada’s made Purple Day just as official as Flag Day (February 15) and Remembrance Day (November 11).
Epilepsy awareness goes on throughout the year, but for epileptics and their families Purple Day is the highlight to raise awareness and spread the word.  Since January Twitter’s been chirping about epilepsy’s Purple Day.  Some are changing their avatars and asking others to show themselves wearing purple.
Others are creating videos on YouTube that are getting thousands of views.  There are events on Facebook.  The most widely tweeted picture is the Purple Day logo 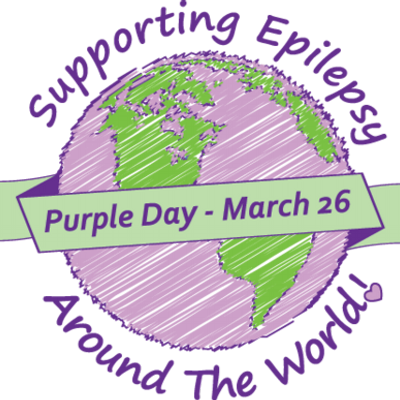 Epilepsy Toronto is holding a Purple Day scavenger hunt and party at the Elgin and Winter Garden Theatre Centre (189 Yonge Street) with “music entertainment, face-painting, and all things Purple.”  They’re also going to have a Purple Day table at Union Station.

What is epilepsy?
It’s the word for a disorder that affects 1 in 100 Canadians who have a tendency to have recurrent seizures that affect the brain.  But don’t worry; it’s a disorder not a disease, so it’s not contagious.
Have you ever seen someone blank out for a couple of seconds almost as if they are daydreaming?  Or maybe you’ve seen someone lose consciousness with convulsions.  Well whether you have or haven’t, if you know 100 Canadians, you probably know at least one with epilepsy.
What is a seizure?

Properly defined, it’s an involuntary change in a person’s awareness or behaviour because of abnormal electrical activity in the brain.  Most people think a seizure is characterized by the person falling to the ground, becoming rigid or entering convulsions.  These are generalized tonic-clonic seizures, but according to Epilepsy Ontario, they only make up 23% of epilepsy seizure incidences.  The most common forms of seizures are known as complex partial seizures. What happens is a person loses awareness, appears dazed and confused, engages in meaningless behaviour (mumbling, turning their head, pulling at their clothes, etc.), and doesn’t remember it after the seizure.

Although it often shows itself in childhood or in seniors, epilepsy can appear at any age in a person’s life and it hasn’t been found to affect one race or nation more than another.  It isn’t hereditary, but those who have family members with epilepsy are at a higher risk.  More common causes that lead to a person developing epilepsy are from a brain tumour, a serious head injury, and brain infections. Anyone can have a seizure; people with epilepsy just have a lower seizure threshold – the level of stimulation their brain can handle before it has a seizure is less.  Sometimes there are triggers for epileptic seizures – bright lights, loud sounds, a sudden startle, stress, and for some women, changes in hormone levels; at other times the cause is unknown.
Even though these seizures affect the brain, epilepsy is a physical condition, not a mental illness.  In other words, those affected by epilepsy don’t see psychologists; they see neurologists.  It directly affects a part of the brain, and sometimes brain surgery is the answer.
Epilepsy does NOT place limitations on a person and some of the most famous people in history were epileptics.  Sir Isaac Newton was one; some say that it was when the apple fell on his head and he was struck with the inspiration for gravity, his brain was injured and his seizures began.  Other famous epileptics include Vincent Van Gogh, Beethoven, Napoleon, Charles Dickens, Prince and Lewis Carroll.  Canadians who haven’t let epilepsy stand in their way include Neil Young and Emilie Dionne.
According to Epilepsy Toronto, over 40,000 people in Toronto are living with epilepsy.  Chances are that you might one day see someone having a seizure, would you know what to do?  Here’s how you can help

For more information check out these other sites