Thanks for coming back to see the answers. If you missed it check out the February archive or scroll down.
If you scroll down the answer page you’ll see that some of the clues have changed. But the crossword still has the same theme

Epilepsy:  It’s a neurological disorder that affects 1 in 10 Canadians.  This crossword has terms that relate to epilepsy.  Each answer will give you more information. 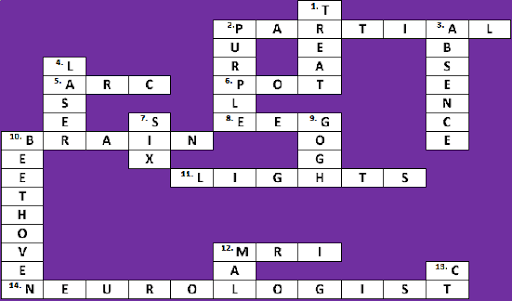 Across
2. If you ever see someone having a complex partial seizure, the best way that you can help is remove any dangerous objects that are nearby. Make sure the person doesn’t wander dangerously or aimlessly. But let the seizure take its course. Don’t try to restrain the person and never put something in the person’s mouth. If the seizure goes on for more than five minutes or repeats without a full recovery then call EMS

5. Joan of Arc is also said to have had schizophrenia, not just epilepsy. But that still didn’t stop Jeanne d’Arc from helping the French beat the English.

6. Even though the Battle of Pot is still going on in Canada; a couple of American states legalized marijuana in 2012. But it’s still illegal nationally except for medicinal purposes

10. Because epilepsy affects the brain, a lot of people are scared to talk about it. But there’s a common saying among those with epilepsy “It takes a brain to have epilepsy”. Newton had a brain and he had epilepsy; he fits the bill.

11. Flashing light is a trigger for some people’s seizure, so there are TV shows and movies they can’t watch. Other people have to make sure they keep their schedule perfect – go to bed on time, eat every meal, and take their meds; otherwise they’ll have a seizure. But there are some people who don’t have a trigger; their seizures appear at random times without a known cause

12. A lot of patients with epilepsy go through this scan to confirm that they’re diagnosed with epilepsy and to check if they’re eligible for brain surgery. It involves going through a tube and hearing loud noise. People with cancer and other diseases/disorders often go through this scan too. It uses magnets so you have to take off all your metal jewellery and other metal objects before going in. If you have metal objects inside your body before going into one you have to tell your doctor/technician because the “Magnetic Resonance Imaging” (MRI) might move it.

14. A neurologist knows a lot about the nervous system and the disorders affecting it, but after being diagnosed with epilepsy, you see an epileptologist, a neurologist who specializes in epilepsy. This doctor is the one who diagnoses medication and takes care of testing.

1. Some people aren’t able to control their seizures using just medication or medicinal marijuana. So they resort to brain surgery to treat their seizures. For some, surgery may be taking out a tumor or a lump in their head, but for others it may be taking out a piece of the brain. But today the means of treating epilepsy are growing. There are pace-maker like chips that can be implanted into the skull, and other electronic devices in development that have been found to ward off seizures.

3. If you see someone having a Petit Mal seizure, going through something that doesn’t look right, the best thing you can do to help them is doing the same thing as someone with a complex partial seizure: give them room, don’t restrict them, watch them, and stay nearby in case they lose consciousness, injure themselves or a paramedic needs to be called.  One type of Petit Mal is an absence seizure, when a person looks completely phased out and has no idea what’s happening.

4. Laser surgery might be in Europe right now, but it might come to Canada soon too since it’s in America.

7. Some people with epilepsy are lucky – they go six months without a seizure and then they can drive. But others aren’t as lucky. They have to rely on taxis and public transit for their entire life. In Brampton and Mississauga someone who’s blind rides free; but in Hamilton, Toronto, and Ottawa, all adults, whether they can or can’t see, pay regular fare.

9. Vincent Van Gogh took his own life, but after a short time there were memorial shows of his work.

10. At the age of six, Ludwig van Beethoven, on March 26, 1778 (what’s Purple Day today), performed his first public recital, arranged by his father. In 1781 he said “Music comes to me more readily than words”. He died on March 26, 1827 but not before he left the world works that are still listened to today.

12. The best thing to do if you see someone having a Grand Mal seizure, also known as a Generalized Tonic-Clonic Seizure, when the person becomes rigid and falls is make sure there aren’t any dangerous objects nearby, lay them on the floor, but on their side and make sure their airway is clear by loosening any collars or ties. But NEVER pull out someone’s tongue because they won’t swallow it during a seizure; it’s impossible (try it!)